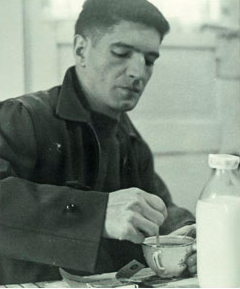 In the early 1960s, Cleveland writer Raymond DeCapite made a name for himself with two books about dreamers. In one, Fabrizze is an immigrant who works hard; speaks in big, broad language; charms his buddies into betting on the stock market; gets run out of town when he loses it all; but lives to weave cotton candy out of thin air another day. In the other, Paul Christopher is a young man who looks out for his old dad but, showing little ambition beyond selling watermelons and playing the harmonica, gets kicked out of the house and is then adrift.

The Coming of Fabrizze and A Lost King received glowing reviews from The New York Times, the New York Herald Tribune, and the Saturday Review. DeCapite won the second Cleveland Arts Prize for Literature in 1962. And then, as is the case with more than a few wonderful books that have failed to build instant buzz, … nothing. The titles have been out of print for 50 years.

Although Fabrizze ranks among the handful of classic novels set in Cleveland, it’s nearly unobtainable in the city except for several copies buried in the downtown Cleveland Public Library. The novels aren’t physically available enough to be a cult phenomenon. Their muscular yet lyrical prose — wry humor, rawness and energy distilled into short bursts — are more of a fanciful legend, a memory of something great that a friend heard of but hasn’t gotten hold of yet.

Raymond DeCapite died in July 2009, at age 84, having published five novels and three plays. His oeuvre reads like a long poem to the working-class West Side, the spare descriptions conjuring up the blue chug of steel mills and the 2 a.m. sizzle of fried eggs amid the cold blade of life lived by punching a clock.

His son, writer Mike DeCapite of Brooklyn, N.Y., has long been on a mission to get his father’s books reissued. “For as long as I can remember, I’ve put those books in front of people,” he says. “I sent them to agents and editors. I’ve tried to get them in front of movie directors.” He even got author Don Delillo, a National Book Award novelist who had Fabrizze on his bookshelf, to send a copy to The New York Review of Books with the hope it would reissue DeCapite’s work in its Classics Series for overlooked fiction. All he heard back was silence.

Then, before Raymond’s death, Mike received word that Kent State University Press would be reissuing Fabrizze and A Lost King. “I was really happy to be able to tell him that was going to happen,” Mike says. “It just always seemed really a shame that those books were out of print. They’ve never gotten their due. I think they’ve been ghettoized as Italian-American regional fiction.”

During one of their last visits together, Mike read his dad the new foreword to Fabrizze, which should be in bookstores with A Lost King this month. Mike is also in the process of organizing a series of readings in Cleveland — and if all goes as planned, New York — to promote the books. “It counterbalances his death a little bit,” Mike says. “It’s nice that I have this to do. I don’t have any unrealistic expectations about what’s going to happen. But hopefully, the word will get out, and people will have a chance to read them.”