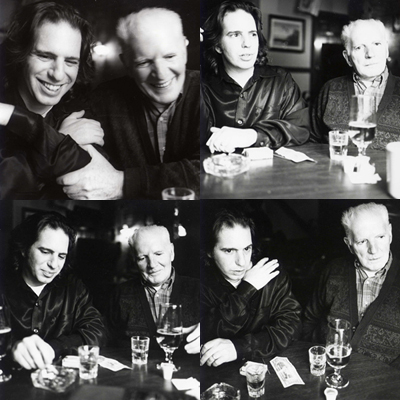 The Italian American Reader’s got the goods,
from Talese and DeLillo to Cleveland’s own DeCapites.

It’s an eclectic anthology that encompasses writers as diverse as mob daughter Victoria Gotti and cultural theorist Camille Paglia. Sitcom star Ray Romano would appear to be out of his element, crossing pens with the literary likes of Don DeLillo and Dana Gioia. But The Italian American Reader is meant, says editor Bill Tonelli, to be a collection “representative of Italian American writing” and not definitive.

A former editor at Rolling Stone and Esquire, Tonelli waded through “a couple of hundred books,” making note of writings that he liked and selecting pieces that met his own taste as a reader. He threw out anything he felt was sappy or cutesy or merely nostalgic for Old Country. Those with stereotypical Mafiosi or nonnas brandishing wood spoons didn’t make the cut.

The anthology includes poetry, essays, short stories and journalism, plus excerpts from novels and important nonfiction works such as An Accidental Biography by Barbara Grizzuti Harrison, Unto the Sons by Gay Talese and Jerre Mangione’s An Ethnic at Large. There’s a selection from Mario Puzo’s estimable novel The Fortunate Pilgrim, a bit from DeLillo’s Underworld, a few pages from the fiction of Richard Russo, Ed McBain, Helen Barolini, John Fante, Philip Caputo and others. And, of course, an excerpt from Pietro DiDonato’s Christ in Concrete, perhaps the most revered of all Italian American novels.

The poets are well represented, too, by Gregory Corso, Kim Addonizio, Dana Gioia and John Ciardi, though Lawrence Ferlinghetti is a glaring omission, as are Diane di Prima and Sandra Gilbert.

One could quibble and grouse about who was left out. (Where is Richard Gambino’s classic social history, Blood of My Blood? the experimental fiction of Gilbert Sorrentino? Roland Merullo’s Revere Beach cycle?) Those are the shots an anthology editor leaves himself open to. But Tonelli did pretty well: A number of the most important Italian American writers are here, plus a few of the less expected; his selections provide enticing examples of each writer’s work.

The novelist, poet and literary biographer Jay Parini, who has two poems in the book, notes, “One doesn’t necessarily think of Italian American culture as extending beyond films and entertainment into the literary realm. But there is a vibrant and complex tradition of writing by this segment of American society.

“Bill Tonelli has done a marvelous job of bringing together a body of work by Italian Americans that might not otherwise get noticed as a phenomenon in its own right.”

Tonelli is pleased with the book’s reception and was delighted when 300 people showed up for the debut reading in March, at the Barnes and Noble at Union Square in New York. Having Nick Tosches (who wrote the book’s forward), Don DeLillo and Gay Talese as his main readers didn’t hurt.

Greater Clevelanders will be pleased to find work by two hometown writers in The Italian American Reader: Raymond DeCapite of Parma Heights, with a few pages from The Coming of Fabrizze, a classic Italian American novel, and his son Michael, whose short story, “Sitting Pretty,” takes place at Thistledown Race Track.

“‘Sitting Pretty’ just blew me away,” Tonelli says of Mike’s story. “It’s affecting, funny, engaging, well written. I loved the fact that it was kind of a portrait of his dad.”

It was an excellent selection by the editor. “Sitting Pretty” is a slice of life that illuminates the relationship between a father and son during a day at the track; it’s a great example of Mike DeCapite’s edgy, inventive talent. It also serves as a testament to his admiration and love for his father.

“Mike developed on his own,” says his proud father. “I’d make a suggestion now and then. But he had natural writing talent to begin with. He has unusual insight.”

Mike was born in 1962, not long after his father’s first two novels were published. He started writing in 1980, after he left Euclid High School and began keeping a journal of notes, short pieces and impressions. “Lots of weather … Plotless. A few years later I wrote a couple of prose poems, starting to sketch out some of the ideas that became Through The Windshield.” He worked on that book over the next several years during sojourns in London, Cleveland and Brooklyn.

Published in 1998 by his own Sparkle Street Books, Through The Windshield is a gritty, often hilarious fictionalized account of the young DeCapite’s days as a Cleveland cab driver, when he lived in Tremont and explored the city’s wild side. As with his father’s fiction, it is the terse, nuanced dialogue that grabs the reader. The book earned favorable reviews (including one in the Austin Chronicle by Harvey Pekar, a writer not unfamiliar with Cleveland’s street life) and has achieved iconic status in the literary “underground.”

While his father’s work often has a light, celebratory feel, Mike’s style and approach is more attuned to a hip, darker sort of realism, with an eye on the seamy side of life.

Mike has lived in San Francisco for the past 10 years, though he gets back to Cleveland on occasion. He is writing a column for Angle, the new Cleveland arts magazine, and is hard at work on a novel titled RUINED FOR LIFE!, a portion of which appears on his web page (www.sparklestreet.com). He’ll be in town in November to host a series of readings by some of the anthology’s contributors, including his father.

It was Don DeLillo, among others, who suggested that Tonelli include an excerpt from The Coming of Fabrizze, Raymond DeCapite’s classic 1960 novel. DeLillo, in fact, has been working behind the scenes, trying to see Fabrizze back into print.

“Raymond DeCapite is an important and neglected figure in American writing,” says Jay Parini. “More should be done to bring his work to light.”

His inclusion in The Italian American Reader was, as Tonelli puts it, a no-brainer.

“He is really an artist. Ray DeCapite is a tremendous writer.”

DeCapite, 78, has spent most of his life in the Cleveland area, in Euclid and on the near West Side. While he holds degrees from Ohio University and Case Western Reserve, he preferred the odd job, such as his lengthy stint as a clerk in a Euclid liquor store, because it allowed him time – and energy – for writing. He is the author of several plays and four other novels: A Lost King (1961), which, like Fabrizze, is out of print, Pat the Lion on the Head (1996), and Go Very Highly Trippingly to and fro and The Stretch Run, published in one volume by Sparkle Street in 2000.

Fabrizze is the story of a charismatic young man who comes to America in the 1920s and makes a fortune in the stock market, only to lose everything in the Great Crash. Based on the life and character of DeCapite’s father, a restless man who lived apart from his family, Fabrizze is actually the second telling of the story: Ray’s older brother, Michael, used the same material in his 1943 novel, Maria. That book, however, was more infused with the sadness of their parents’ breakup, and not as brimming with the excitement of their father’s charisma and zest for life. (Michael, who wrote three novels, was killed in an auto accident in 1958.)

In contrast to his brother’s style, Ray used what amounts to a minimalist approach in The Coming of Fabrizze. There is little or no narrative and scarcely any scenic background; the story is told almost entirely through the characters’ conversation.

The Coming of Fabrizze received great notices when it was released in 1960. Orville Prescott said, in The New York Times, Ray DeCapite “has written a modern folk tale…filled with love, laughter and the joy of life.” The Herald Tribune thought it “a comic folklore festival,” while novelist John Fante called DeCapite “a writer of exquisite talents.” Fante seemed perplexed, though, “by the lack of realism in the novel,” notes DeCapite. “I don’t think he quite understood that I was writing a folk tale.”

And it was a folk story that Ray DeCapite set out to tell. He modeled it on the King Arthur legend. “I used the same format: The hero comes, helps his people, then something goes wrong, and he has to leave. The people wait for his return.”

That is exactly what happens in The Coming of Fabrizze. When Fabrizze loses his money – and everyone else’s – he leaves town. Rumors abound that the “golden one” will return soon and make everybody happy. So it was with DeCapite’s father: “He used to come back occasionally, and we’d see him … It was a heartache situation.”

So, why does Fabrizze have such a lighthearted touch, as compared with the gloomier Maria? “I had a little distance … My brother was nine years older and more aware when all that was happening.”

Critics have compared Raymond DeCapite to everyone from John Steinbeck to William Saroyan and Nelson Algren. So, who does DeCapite cite as major influences?

“I was amazed that they could tell a story so completely, just using dialogue. That’s where I got the idea for the shape of Fabrizze, to concentrate on dialogue.”

The passage selected by Tonelli provides a great example. It takes place in the grocery store just opened by Fabrizze and his friends. Using little more than conversational one-liners, DeCapite magically conveys the hustle and bustle of a busy, noisy store, the smell of the cheeses, the olives and the cured hams.

It’s “a signature Italian American setting,” says Tonelli, one “steeped in the stereotypical, but without sentiment or mawkishness. It’s a beautiful, funny scene.”

More than 40 yeas after its publication, Raymond DeCapite is still – justifiably – proud of his first novel. It remains a vivid portrayal of a man and a community hoping to take part in the promise of the American Dream.

Fred Gardaphe, the foremost scholar of Italian American literature, states, “I see Raymond DeCapite’s work as some of the best unfamous fiction ever produced in the United States.”

Ray DeCapite is encouraged and pleased by Fabrizze’s inclusion in The Italian American Reader. “I would like to see my book back in print, on the shelves,” he says. “I think it belongs there.”