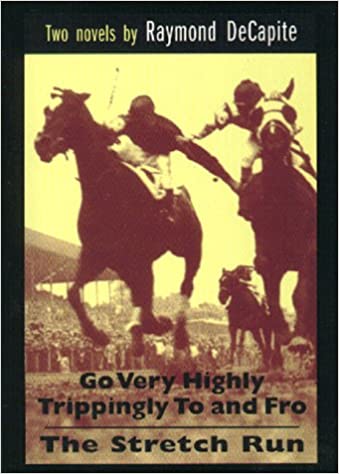 Veteran novelist DeCapite (The Coming of Fabrizze, etc.) writes dialog-centered tough-guy prose, punctuated with occasional moments of compassion. In this two-for-one offering, he reveals the whole spectrum of urban Italian-American living. The author masterfully captures the details of a culture: gambling and gamboling: “eating, drinking, eating”; Sunday afternoon pinochle games; down-on-their-luck men name Cirio, Chooch, Nowinsky and Screwy Phil; an ex-fighter-now-restaurateur name Figaro; Patsy Vovo, who hosts a regular poker game; a parrot named Paul Parrot; and superintendent Tony Zang. Go Very Highly Trippingly To and Fro is haunted by the echoie click of billiard balls, and concerns narrator Andy Farr, who writes bets for a man named “Cappy” and falls head over heels for Rachel, a feisty waitress, while awaiting the return from New York City of his older, slightly mythic brother, Roxie, a fledgling actor and self-professed “culture consultant.” When Roxie shows up Andy loses Rachel to his dashing sibling. Gambling haunts the small world of The Stretch Run, the weaker of the two tales. In each novel, however, a young writer-drifter (“writer” meaning both one who takes bets and one who constructs sentences) finds love, but only at the expense of losing his mentor. “Justice?” writes DeCapite in The Stretch Run, “Forget it.” Fans of Nelson Algren will delight in DeCapite’s prose, often composed in one-sentence paragraphs and seemingly infused with canzone. Despite the surface similarities though, DeCapite’s Cleveland is utterly his own, far away from Algren’s Chicago and he brings a Joycean ebullience to his stark, authentic depictions. Though they unfold slowly, in a sidewise fashion, in the end each novel packs quite a punch. With his brawny, playful dialogue, his sparse scenic descriptions and his brisk yet deep characterizations, DeCapite succeeds in doing what others only aim for: he has constructed a world that feels real.