Palaima on DeCapite on Dylan

Here’s something nice that happened. University of Texas classics professor and MacArthur fellow Thomas Palaima sent this link to a panel he took part in at Case Western in November 2017, cosponsored by the Rock & Roll Hall of Fame. Go to minute 32 for the part that relates to Mike DeCapite.

A short piece called “Christmas Eve” is up at the Howl! gallery site. Happy Holidays, everyone, and here’s to a brighter year to come. 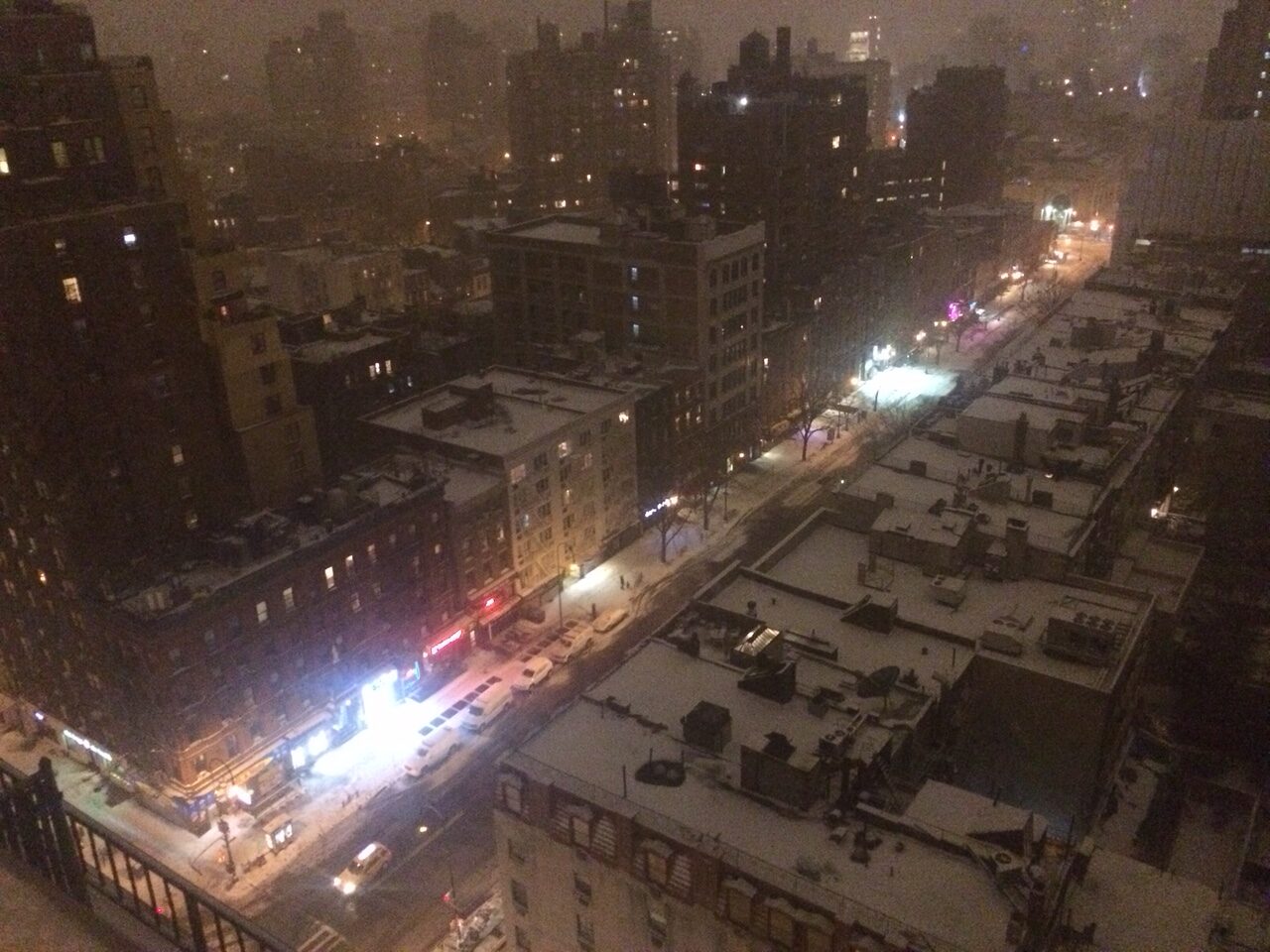 This updates page has been out of commission, and in repairing it, we lost all the entries since 2012. We’re thinking of updating the whole site in the new year, but in the meantime, here’s something never-before published that I read yesterday at a holiday reading at Sanjay Agnihotri and Jeff Wright’s Local Knowledge series at Swift’s Hibernian, NYC.

I lit a cigarette actually in the revolving door, so my first draft of smoke came mixed with a deep winter-night cold as I stepped outside. It was the night they lit the tree at Rockefeller Center, about 9:30, and I cut through the crowds of people who were milling around Radio City and shuffling up and down Sixth Avenue and wondering what to do now and whether they’d had the experience they came for, and the souvenir tables and food carts that were there for the occasion, and the cops, and the metal barriers they’d set up for crowd control. Big snowflake lights were playing on the buildings across the plaza. I stood at the corner looking into the uptown taxi headlight stream of Sixth Avenue, waiting to cross. A white cloud was gushing from an orange-and-white-striped steam pipe in the middle of the road, and a streetlight was hanging in the midst of it like a little nothing moon. I made my way to the subway, carrying a bag with a pair of boots I’d had heeled, and helped a woman carry a stroller with a baby in it down the stairs while her little boy came cautiously down beside us clutching the rail. The turnstiles were jammed and backed up with people who were less hurried and less with-it than the usual crowd in that station, and there were more people on the train than usual on a Wednesday night, and they were in a different mood from the people who were usually on the train at that hour, in better spirits because they were out late in that part of town and they’d done something different tonight. They were tourists of their home city. Some schoolgirls were laughing and passing a plate of cupcakes across the aisle, and there were kids in puffy jackets with hoods and winter hats. The passengers thinned out at the downtown stops, 42nd, 34th, 23rd. At 14th I changed for the L and listened to a guy on the platform who was playing a six-string bass through a little amp and singing through a headset microphone. I got a seat on the L and finished the chapter of the book I was reading, and then found myself watching a family with two little girls in black coats and black knit hats. They were a South American family, maybe Indians. The mother got the girls in front of where she was sitting and the father stood watch over them. He was wearing a black overcoat and a black suit and a white shirt and a tie as though they’d been to church or he’d dressed for the tree lighting, and he’d said excuse me to someone with a depth of courtesy which caught my ear. The girls were bundled up like little old ladies. I was watching them, just watching them with no thought of myself doing it, and then I noticed myself watching them in this way of pure human curiosity and affection and simplicity, and then of course I was watching myself watching them—in other words, it was half an act at that point, but that was okay because there’s no way out of the hall of mirrors once you’ve noticed yourself, and it had started in earnest and was still half real anyway. It felt good to be alone and unattached. I liked the feeling of time on my skin, time and chance. I felt like anything could happen. I felt a lightness I could never feel when I was attached to someone. Freedom of movement, I guess. For me, love is either particular or it’s general, it’s one or the other. I love one person or I love the world. Now I was part of the world. It’s like all my life I’d failed to take advantage of my membership in a family, or to avail myself of some vast resource that was right there for me, if only I could get out of myself, or stop thinking of myself as separate from it. I hoped it would last—it seemed too good to last. It all seemed too good to be true.

This fall, Sparkle Street Books will publish Radiant Fog, a novella comprising a series of short pieces that Mike DeCapite wrote in San Francisco and New York between 2003 and 2008. Here’s a preview:

In the Sun, Part II

Saturday morning at the bus stop. I’ve got my black gym bag and I’ve got a pass: one of those brilliant mornings that leave you unsettled and hopeful in the absence of a hangover. I drop the bag, step off the curb to look down Folsom for the bus. A guy walks over and says they come every fifteen minutes, it’ll be here any time.

He says “I just missed my bus, I was waiting on the 48. I went into the liquor store to get a half pint for these motherfuckers and the bus came while I was inside. That’s what I get.”

With his white-whiskered face and scholarly black-framed glasses, his relaxed martial crouch and layers of clothing—a shirt over a hooded sweatshirt, long cutoff shorts over pants, all of it faded to various shades of formerly black—he looks like he’s had a rough time of it and he’s ready for more. Oversize black shoes.

He’s one of the guys on my steps every morning, the stoop congregation. I have to get past them on my way out. Despite the staggering pain of their mornings, with their faces in their hands, cursing the birds, they manage to scoot aside when they hear me coming down the stairs, all of them begging for death, all except this guy, who looks up from the bottom and shouts “Off to see the Wizard?” It’s half jibe, half commiseration, a nice note on which to set off.

Today he unscrews the cap from a half pint of Ancient Age and takes a hit. Prison tattoo of a spider on the web of his browned left hand.

He waves the bottle across the sunlit intersection to where a pair of men are lying on the sidewalk against a wall. Two trickles run to the curb.

“See those guys over there? The one guy puts in forty cents and takes a two-dollar drink. The other guy don’t put in nothing so he don’t get nothing. Fuck him. ”

“How do they get any money? They never ask for any.”

“There’s always a guy like me! Who goes out and gets it! They never get anything. No initiative! But somehow they still get fucked up. Fall down, piss themselves.”

A line I wrote a long time ago occurs to me, about how, broke or not, alcohol was beginning to find me. Sitting in a car at night, me and Tony with a pint, on 7th Street near Avenue B, and a tape player on the seat playing Professor Longhair. That was a long time ago, and a continent away. Across the street, a trash container lays a long shadow across a litter of small yellow leaves. The morning looks like autumn to me. Autumn starts at the beginning of August.

He says “The other guy just go out of jail.”

We stand there watching him.

He says “I was in jail too. This guy said something to me. I couldn’t see what he was doing, I wear glasses. He hit me with something, broke my nose, my lip”—he passed a hand over his face as though it were a thing separate of him. “I said “I’ll be back to see you tomorrow, you better believe it.”

A kid in a white T-shirt is moving along the opposite curb.
The mayor shouts across—“Hey! Hey, Pico!”

Pico looks up, steps into the street. Waits for a car to go by. He slides across Folsom.

The mayor hands him the half pint.

He says “Muchas, muchas gracias.” By way of acknowledgment he tips the bottle at the mayor, then takes the bottle to a trash can and moves away. The mayor’s surveying the street. He spots a penny in the wet leaves at the curb. He gestures toward it and says “See what I mean? There’s pennies, dimes—these motherfuckers don’t even look!”

He plucks it from the gutter and pockets it.

The two men are still on the sidewalk, propped against the wall.
He’s shaking his head, watching them. 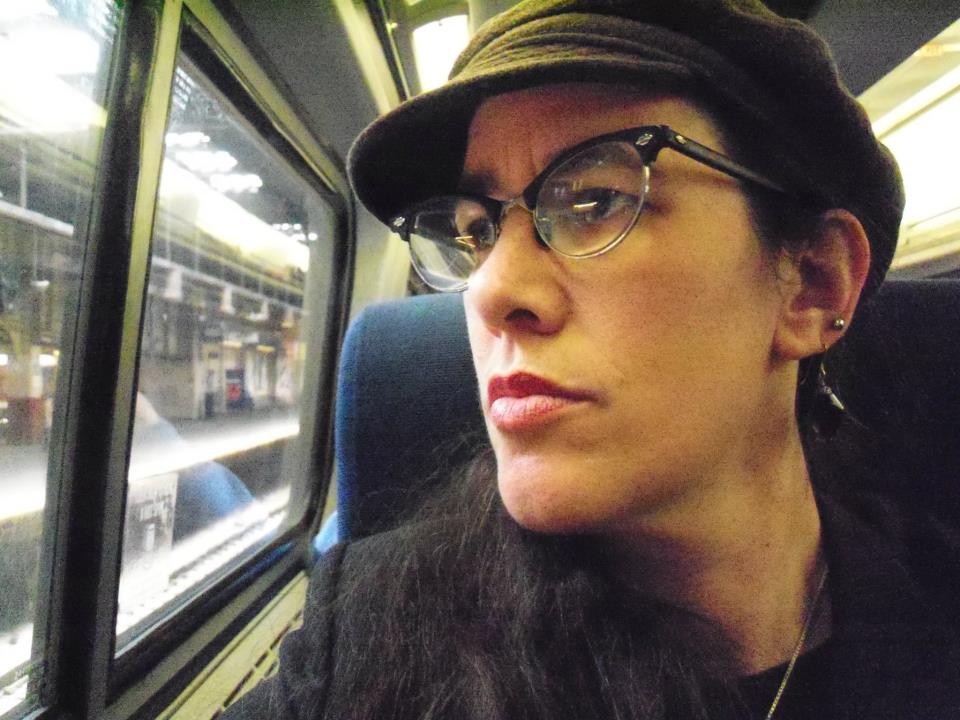 Novelist Karen Lillis – author of Watch the Doors as They Close (Spuyten Duyvil, 2012) – has posted an interview with Mike DeCapite at her blog Karen the Small Press Librarian. “New small press blog! I interviewed writer Mike DeCapite about his writing habits, the unique prose genre he’s created, his influences, and more: ‘Certain works encourage you to trust your instincts. And youâ€™re influenced by your own work. You write something that leaps forward, ahead of where you are, and then you write to catch up with it.'” 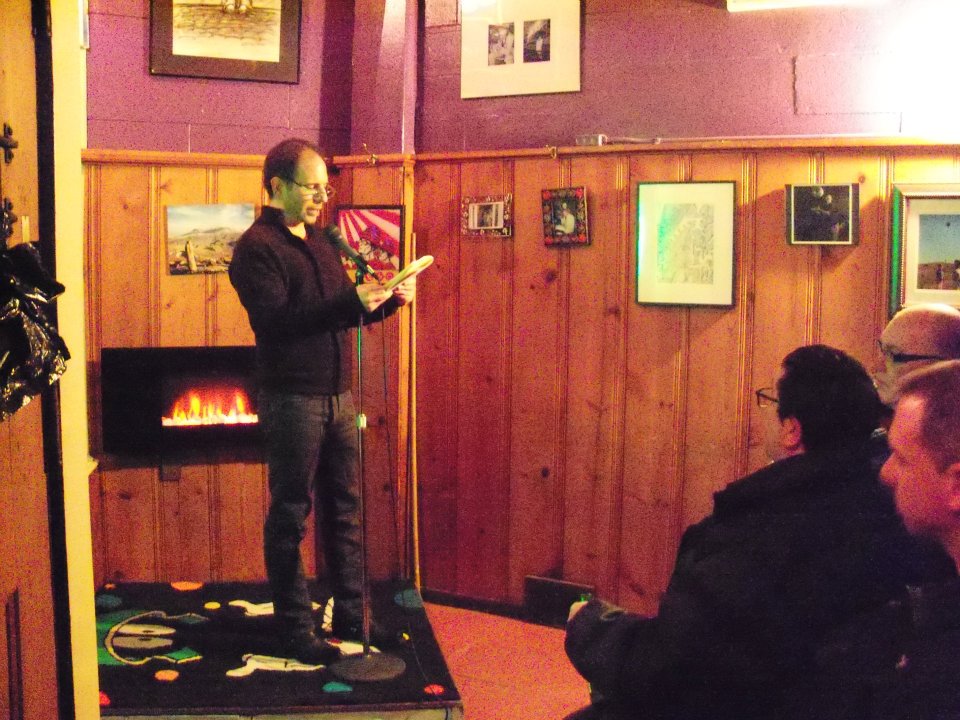 Mike DeCapite reads at the Literary Cafe. 3/9/12. from Andy Timithy on Vimeo.

DeCapite was pleased to share a bill with Karen Lillis, who read material and outtakes from her knockout new novella, Watch the Doors as They Close.

Mike’s Creamsicle Blue is available HERE and at Amazon. But if you order it here, it comes post-paid, and right away. 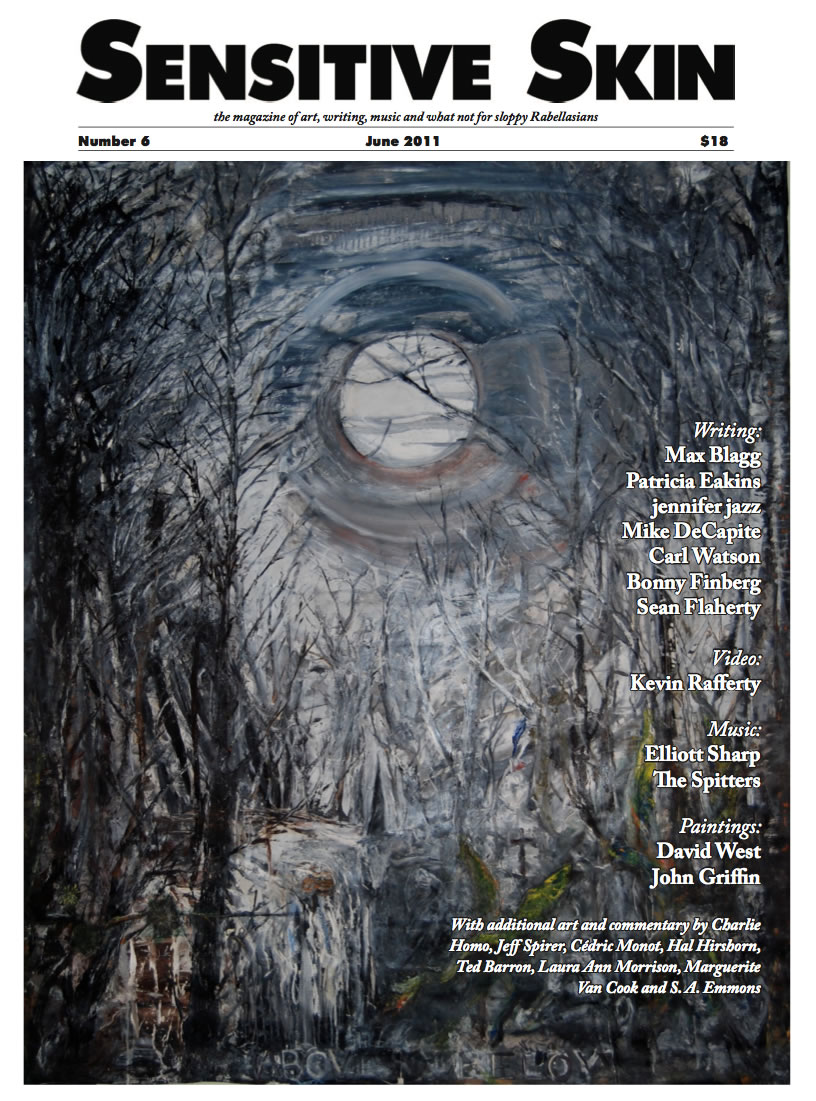 Sensitive Skin publisher Bernard Meisler has been catching up the print editions of the magazine with the online editions. The print copies are lavishly done, and come with a pair of white cotton gloves so you can read them without fear of soiling them. Issue #6 contains “Love,” an excerpt from Mike DeCapite’s novel RUINED FOR LIFE! – unavailable elsewhere – and a razor-sharp reproduction of the Ted Barron photograph that inspired the piece. (RUINED FOR LIFE! is forthcoming from Sensitive Skin Books.) Plus writing by Max Blagg, Patricia Eakins, Bonnie Finberg, Sean Flaherty, jennifer jazz, Carl Watson, and other writers; links to music by Elliott Sharp and the Spitters; and paintings by John Griffin and David West. You can buy it HERE. 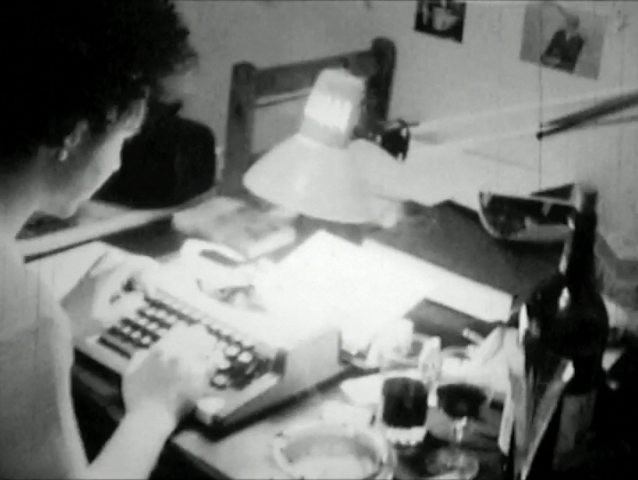 Click HERE for Ted Barronâ€™s beautiful short film Grand Street Winter (1990), which includes lots of footage of painter Kit Keith picking her way through old-days Williamsburg and an illuminating glimpse into Mike DeCapiteâ€™s kitchen and working method at that time. The film features Kit, Moe the Cat, DeCapite, Tony Maimone, Doug Morgan, and Jim Krane, but the real star of it is Tedâ€™s photography.