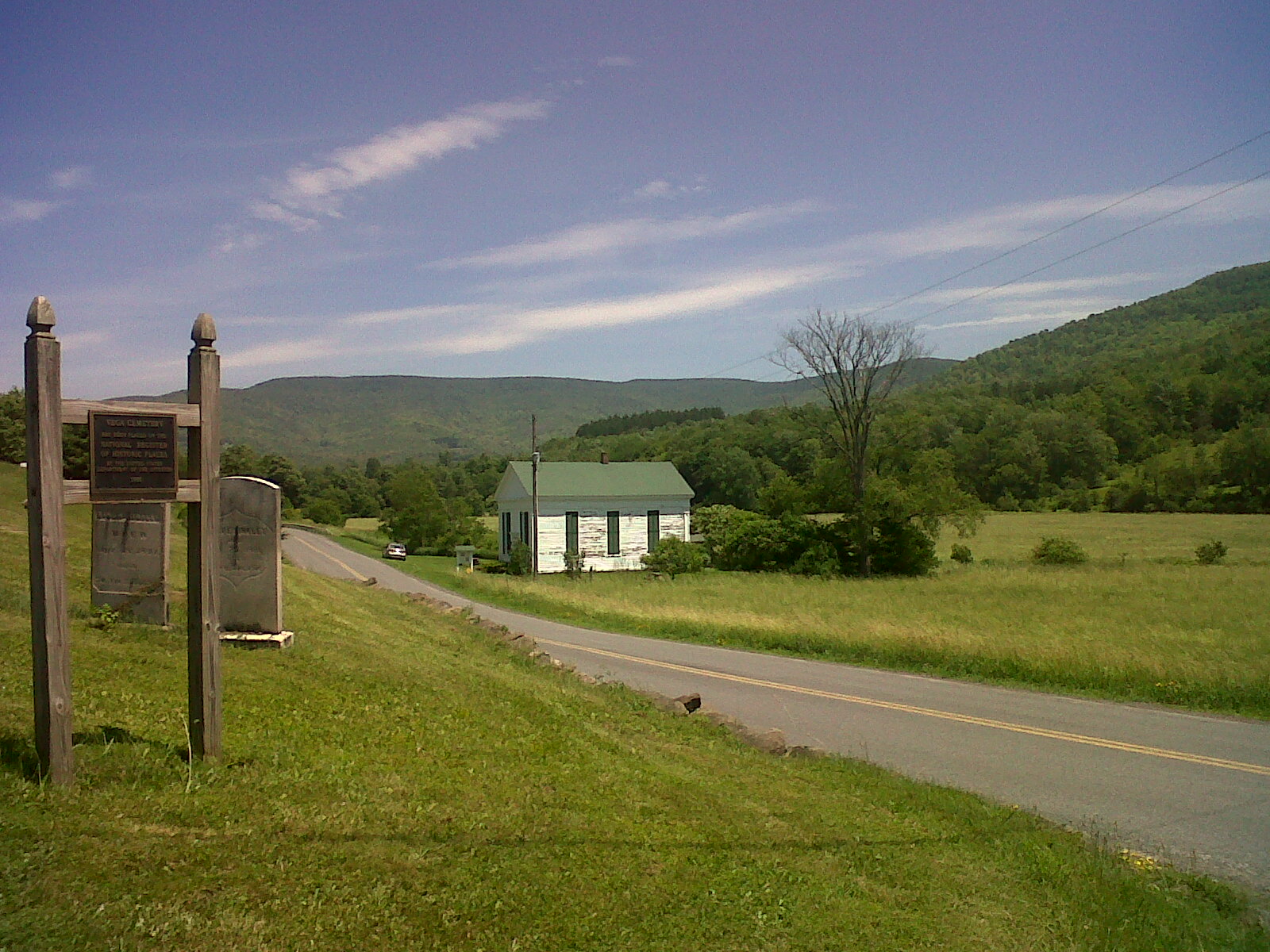 When it was over I hid out in the Catskills. When it was really finished between us, and had been for some time. One afternoon I stood up and the chair went over. I heard it as it might have sounded to my neighbor downstairs, hitting the floor. I laughed and thought Okay, this is idiotic.

I packed a bag and drove north. I wanted to put myself out of reach. She hadn’t called me for weeks, so I was doing my part to deepen the silence. As I drove I was thinking about her, quarreling with myself, replaying the scenes, staging new ones. There was no real hiding. But I could put new sights in front of me, which would force their way between my thoughts of her. I could put myself in the hands of time, or try.

It took forever to get there, longer than I expected. Spring was only just arriving to the mountains. Everywhere was the sound of water making its way down. In a week, the grey mountainsides were touched here and there with green, or a color more temporary than green. A hawk would circle. The landscape seemed to hang in the balance of the year. It could go either way, forward or back. The stars I saw on my first night reminded me about stars, as though from a former life. Cooper, who lived up there and was used to them, talked about the stars he’d seen from the Sinai Peninsula. He’d felt he was seeing them through thousand-year-old eyes.

I was helping him to paint a church. It was a white wooden structure, unadorned, with a little stream running behind it, surrounded by mountains. There were only about forty pews. It was a First Old School Baptist church, whatever that meant. It had been there a hundred and fifty years. The last member of the congregation had died ten years before. She was 98 years old. Maybe the denomination had died with her. The place was less a church than a tomb. It felt like a tomb, even after we took down the old wooden shutters and let some light in. It was colder in there than outside. In the mornings I could see my breath.

I was disoriented by the daily lightness of it all. I had the feeling I was forgetting something, like my wallet or keys. One morning I woke up looking at a mirror, thinking Where am I that there’s a cello in the room, and all these toys? I drove to the church on a winding county two-lane. Two geese were looking at me, stepping toward the road. They were a beautiful grey, with black heads and necks. They were working the grass, but stopped and stood at alert. Then one of them lowered its head to continue what it was doing, and the other followed.

At the church, my folded sandpaper was on a bench, beside a pail of cold water with a sponge floating in it. I propped open one of the heavy leaded windows, turned on the radio, and resumed sanding the pews and thinking about her. Cooper was at another job, so I could devote myself to her without distraction, cycling through my thoughts while the radio cycled through its tired playlist. When I went outside I couldn’t hear the radio, only the wind in the grass and in my ears.

We were sitting in the yard after work. Cooper was drinking a beer. He put down the newspaper and said “Quit acting so heartbroken.”

“Yeah. It’s embarrassing, isn’t it? Now that you say it out loud? It sounds a little unreal.”

He lifted the paper and folded it over. Mosquito torches were flaming, smoking. I moved along the perimeter of the yard. I knew what he was talking about. Just because you’re suffering doesn’t mean it’s not an act. We’re all acting, all the time. Men, anyway. Even when we’re alone. She’d never believed I was in love with her. She kept me at arm’s length while she figured it out. She was always halfway out the door. Maybe she knew something I didn’t know. But we don’t like to give anything up. So I was always trying to convince us both. The momentum of it carried over after she was gone. It was dangerous because it was open-ended. Now that I had no one to convince but myself, it could go on forever.

The weeks went by. I was walking out of a hardware store when it hit me that I hadn’t thought about her in half an hour. High spring seemed to be reflecting a shine from beyond the world, a place where nothing moved. Every morning I saw the geese in the grass, and they watched me go by.

As I felt more independent, the pain eased off. I suspected it might slip away altogether, and with it my last connection to her. One night I almost called. I told myself I’d sleep on it and decide in the morning. But the decision had been made with the decision to decide. In the morning I went straight to the phone. Cooper was crouched by the fireplace with a coffee and the Times, letting his cigarette smoke go up the chimney. He said nothing as I took the phone outside. She didn’t answer, so I left her a message and the number where I was. In doing so I gave away the game.

Hour by hour at work, crawling around and painting the old pews, I thought of her. She’d see it was a shame to let it all go, let it die of neglect. One fantasy came smoking out of another. She was coming to me in a white eyelet sundress I’d given her. I was marrying her in this very church. After work, I went straight to the answering machine. She’d left a message saying “I’m not coming back.” I went to bed early.

I got up in the morning to clean up the mess. I expected a litter of ashtrays and bottles, but the party which got out of hand was all in my head. Cooper was over by the fireplace with the Times and a coffee. I had a clear sense that my mind was a universe, too big for me to handle or contain. I could find any truth I wanted to find there, but it wouldn’t really be the truth. There is no really. A universe was just the raw material for any illusion I chose. And if nothing is true, you have to choose. You have no choice.

I drove to the church. The geese were in the grass near a guardrail. Farther on, a grouping of deer was paused near the edge of the woods. They happened to be deer. They watched me and I watched them as they went by, as though we recognized each other there. Meanwhile, my head was trapped inside my past. Encased in it, as though my past were a helmet that provided me with oxygen and protected me from the void. I wanted to drop my past and take my chances in the void. In a field, a red fox was stalking a crow. The fox turned its head, tracking the movement of the car. I could feel the whole sick, repetitiously failing cycle of love twisting back through the years. There was a parasite inside me, a worm which wanted something I didn’t want. I couldn’t sell out to some idea of love or God, or my need for either. What I wanted was to renounce my identity. See through it to the entity underneath which was free of definition, free of history, free of expectation, and was just an opportunity for life.

In front of the church was a stone platform which had been built as a place for people to step down from their carriages. I used to go out and sit on it in the sun and smoke a cigarette and watch the grass stirring in the breeze. The platform was a stairway of five stone slabs. Cooper had told me that the stone was bluestone cut from a local quarry. But there was no quarry in sight. I could hardly believe that people using 19th-century tools had cut those slabs from the rock and carried them out of a quarry and loaded them onto a horse-drawn cart and transported them there, for that purpose. The labor, the danger—even the conception were beyond my grasp. Let alone, say, the Great Pyramid, or the cod industry, or the Roman walls running all through Europe to England. Like most human endeavor, the thought of it left me exhausted rather than inspired. The exhaustion started with myself. The only thing I could feel good about was that I hadn’t had a drink in three years. That was all I had to go on. What was I doing here? It was a matter of yes and no to life. It was the little matter of God. In the grass, impossibly, the sun was shining on each and every blade.