There used to be an older lady at the bar where I used to drink who always gave me the best advice.

The bar is no more, and I no longer drink, but I assume she’s still around somewhere. And by “older,” I mean she was maybe ten years older than me, you understand, although I’ve reached that age where I am “older” than a good many of the people I know, though I can’t vouch for fhe quality of my advice. At any rate, this lady worked in retail and she would stop by for a single drink after work each day; she had her own spot, where you dare not sit if she arrived, and she was sufficiently well-loved that the bartendresses took her with them on their summer vacations to Cuba.

I remember asking her, on one of those nights in which it felt as if I was out to sea in a bad storm: “Can you tell me why love gets harder as you get older. Everything else gets easier the older you get, but not love- that gets harder. Why is that?”

She paused for a second to think, and replied simply: “Because it means more.”

Which, of course, is exactly it. When I was a young man, I was looking for a playmate; and now, it feels I’m looking for sanctuary. Or, at least, someone to talk to and never have enough time to finish talking. This week, I read Mike DeCapite’s novel Jacket Weather, just released by Soft Skull Press, and it captured, like nothing else I’ve read, how it is to talk and talk with someone you love at a certain age in your life in New York City, the city that never stops talking.

Mike and June are two acquaintances from the downtown music scene, refugees from the 80s, who have never quite had the chance to be together in the few decades they’ve known and had crushes on one another. They’ve been through a few marriages each and they reconnect right when she’s going through a divorce and he’s working on a manifesto about the pleasures of being alone; neither of them are quite ready for this. But, love and death don’t give a damn about your scheduling and they soon find themselves wrapped up in something they can’t quite define, and which she doesn’t want to pin down as much as he seems to, and so they talk and talk.

In fact, the music of this novel is in its vocals. Mike and June talk with friends and each other and he listens to the old guys at the YMCA talk about old gangsters, jazz singers, and how to prepare pasta perfectly, and where to come by it: all the important topics. DeCapite is a skilled mimic and chronicler of the sheer poetry of human conversation and you can hear the dialogue, much of which made me laugh out loud. Take this scene with old NY friends June and Jane: 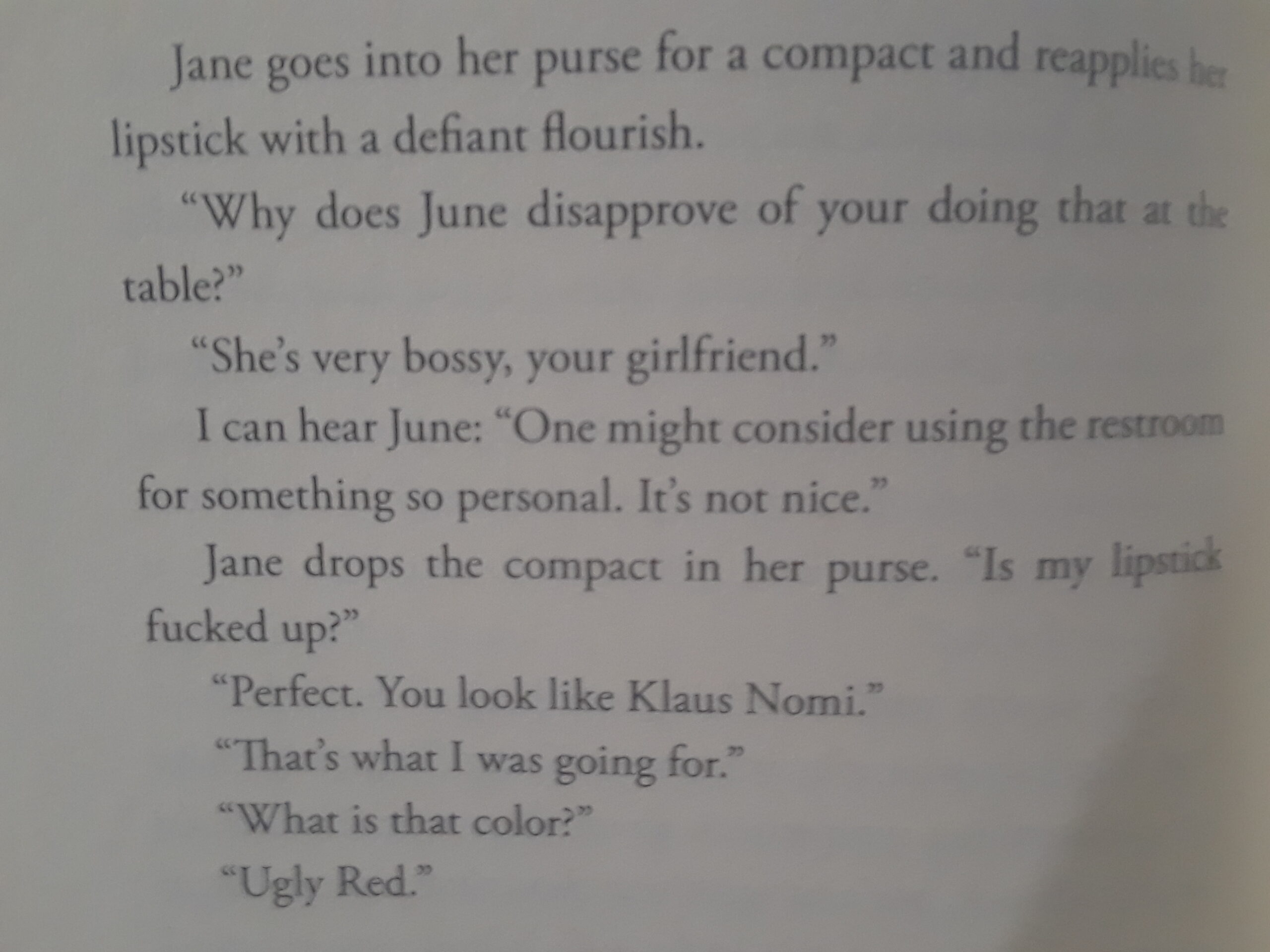 I know these people just by listening to them talk- it’s really how we know everyone we know. DeCapite loves these people and he lets them speak for themselves. There’s artistry there, but its still very close to listening in on real life. I was frankly a little sad we all couldn’t still hang out after the book was over. 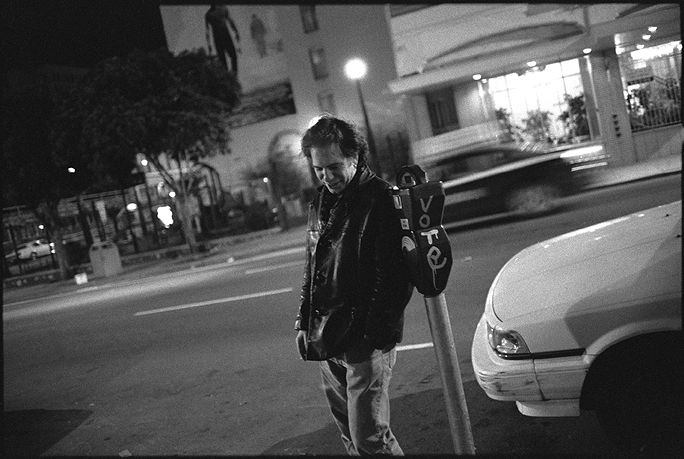 There’s also a specificity to the characters that comes from their shared references. It occurred to me how much entering into a music scene at a certain time and place is like being classmates together- you share the little jokes and references and the great shows that compose the fabric of your life. It meant something that the characters were going to see Walter Lure, or hanging out with Judy Nylon, both of whom were the real deal, brilliant downtown songwiters who have been maybe a little forgotten and overshadowed by the flakes and poseurs. Life is like that- nothing ever quite happens the way it should have, but there’s a real dignity in simply sticking to your routine and persisting.

You could say this is what Mike DeCapite has been doing for some time now. His talents have been long recognized among a handful of loyal readers of his novel Through the Windshield, which he began in 1985 and finished 13 years later, and his self-published chapbooks Creamsicle Blue and Radiant Fog. Luc Sante has praised him. Richard Hell gave him his first reading. (We linked to one of his pieces for Christmas, 2017) But he’s always been a bit of a “lesser-known” great American writer. In fact, I remember a mutual friend once, in a conversation about the small-mindedness of contemporary publishing gripe: What can you say a publishing industry that hasn’t published a writer like Mike DeCapite? Well, they have now and this book makes the case they should have long ago. The point is he’s still doing it; he’s still the real deal.

And, frankly, its a refreshing change from MFA prose. DeCapite’s style is lyrical and its spare poetic prose is saturated with meaning. He writes: “Wherever you a re in New York, you’re at the heart of it. New York is holographic: every part contains the whole.” And every sentence seems to cotain the whole novel, even when the sections are as long as: The sky is grey and God is on the breeze.

The impressionistic style evokes the way that everything feels sharper and more intense when we’re in love. Each image and sensation feels like a revelation, just like it does when you’ve just fallen in love with someone.

Some readers might find it doesn’t “move like a novel,” it’s not plotty. It passes gently before you know it’s passed, and of course that’s exactly what always happens with dear friends.* To my mind, this is more satisfying; it feels more like life. What else is a novel but the impressions of the world filtered through a single consciousness and pressed onto paper? Towards the end of the novel, it’s subtly mentioned that Mike and June have been together for ten years, which brought a smile to my face. Where does all the time go?

And where do we go? His characters are the folks that stuck with the music scene after the best shows, and with New York after it passed a certain prime, and most importantly, they stuck with each other. One of the gentle ironies of the book is that Mike and June have reached the age where they’re not so cool anymore at the same time as New York had just started its decline to become what Gary Indiana has called “the world’s largest money laundry.” Mike tells June “Step by step, you go from the inside to the outside… Life is a process of being gently shown the door.” I’ve described reaching a certain age as being at a party where others are subtly hinting it’s time for you to go. But, then what? Neither of them quite know what’s next.

So, the book’s tone is whistful and a little elegiac, a little yearnful. We want these people to get it right, this time, not because they’ve reached “retirement age,” but because we know they’ve found true love and it’s terrible to squander a miracle.

Most of all, because it means more.

*Endnote: Before I ask the big question, I would be remiss not to mention a dear friend of our little ex-record store, Adam Wood (or Atom Would) who unexpectedly passed away in his sleep two days ago. As is always the case with these things, Adam was someone who was universally loved. He was amiable and funny and passionate about his music, and totally devoted to the scene that supported him. I saw him nearly every time I worked in the store and it was always a pleasure. And, well, I don’t even think he reached 40. It really makes no goddamn sense. Rest in Power, Adam.

And so, what are YOU, reading, writing, watching, pondering, playing, or reminiscing about this weekend?